The History of Standby Power

The History of Standby Power

Nobody discovered standby …
It just sort of appeared and grew over time. 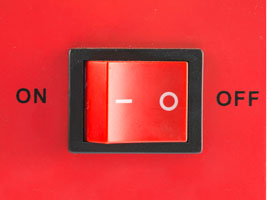 In the beginning, electrical devices were either “on” or “off” and their operation was mediated by a mechanical switch that opened or closed an electrical circuit. Power consumption was either zero or something significant. The appliances using this power were heaters, incandescent lights, and motors, all of which operated with Alternating Current (AC).  A few electrical products – mainly fluorescent lights and radios – needed Direct Current (DC) but they had their own, dedicated transformers. These transformers were downstream of the switch, so the transformers were switched off with the rest of the product. 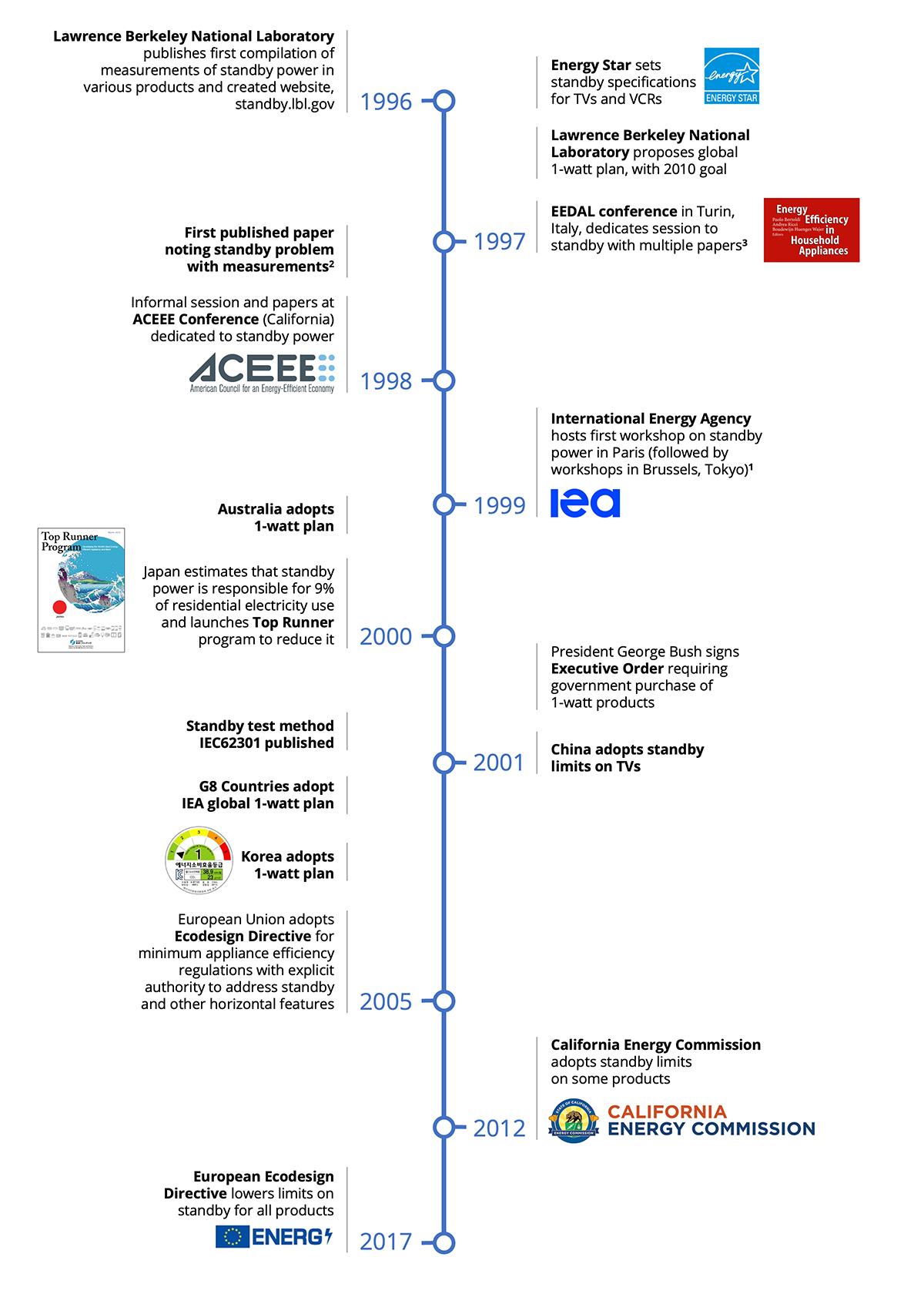 The first product in the home drawing standby was the electric doorbell in about 1913. It became possible only after the AC/DC transformer was invented and could be connected to the residential AC circuit. The transformer is continuously energized so that the bell would ring whenever the button was pushed.  The second product with standby power was the remote controlled garage door opener, which was invented in 1931. However, mass production did not occur until 1954.

The television was the next product with standby in the early 1960s. Two functions required standby power. First, an instant-on feature was maintained by continuously heating filaments in the cathode ray tube (CRT).  Second, circuitry needed to be continuously powered to receive signals from the remote control. By 1970, nearly every American home had more than one device with standby. In the 1950s, the TV cable box began supplementing over-the-air reception and added another standby load (more so when broadcast went digital). The earliest VCRs appeared in the mid-60s. They needed to be always-on in order to respond to a scheduled event, timer, or to a remote control.  Of course, they also needed a display to inform the user of its status. Consumers could not unplug them because they would lose pre-programmed settings and times. 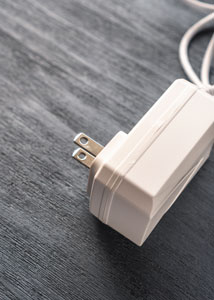 The boom in consumer electronics began in the 1970s and exploded in the 1980s. The external power supply -- which converts the AC power to low-voltage DC suitable for electronics -- was in part responsible for the explosion. Manufacturers moved the power supply from inside the product to outside and put the power supply in its own package. This innovation hugely simplified manufacturing and safety requirements because the product used only low voltage DC inside. Best of all, the same product could be sold throughout the world simply by swapping the external power supply. This technology worked for most low-power consumer electronics, while larger ones (such as TVs, computers, and microwave ovens) still relied on internal power supplies.

The early 80s saw the introduction of many mass-produced consumer electronics relying on external power supplies, including cordless phones (and answering machines), radios (and boomboxes), battery chargers, etc. All of these devices added to standby loads in typical homes and, later, commercial buildings.

External power supplies greatly reduced the cost of manufacture but they also guaranteed standby power use. Now the on-off switch on the product was downstream of the power supply, which left it continuously energized. The only way to assure zero standby was to pull the plug on the 115VAC side. But many manufacturers assumed consumers would not do this and even added features (such as clocks, remotes, and displays) that required non-stop power. (European countries sought to discourage this trend by requiring TVs to have hard-off switches.) Sometimes the “on/off” switch disappeared entirely. Products began to consume several watts -- and sometimes as much as 20 watts -- even when they were performing only peripheral functions (like running a clock or illuminating a status light). The external power supplies were often responsible for a few watts and were warm to the touch.

In the late 1990s, a greatly improved external power supply was introduced, the switch-mode power supply (SMPS). It was significantly more efficient than the older linear power supplies but it was also much lighter and a little smaller.  The early mobile telephone manufacturers were early adopters; they hated the linear units because they were larger than the phones. The SMPS was smaller than the phone, which seemed like a sensible marketing strategy. Since then, SMPS have completely replaced linear units.  They have also become extremely efficient and with no-load losses often below 0.2 watts. 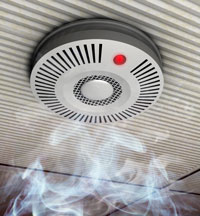 The majority of occurrences of standby are in consumer electronics; however, other continuous uses of power are still important. A small heater is used in heat pumps and air conditioners to ensure that the refrigerant and lubricants do not migrate during cold weather. These heaters are often kept on regardless of temperature to protect the compressor.  The  electronic controls for heating and cooling systems, demand water heaters, and heat pump water heaters operate continuously, regardless of heating or cooling loads.  Similarly, hot water recirculating pumps circulate hot water continuously regardless of the hot water requirements.

Building codes require technologies to protect the occupants from electric shock and fire; these sensors also draw power continuously. The most important examples are GFCIs and hard-wired smoke detectors.  Each device draws very little power; however, houses will require many of them. 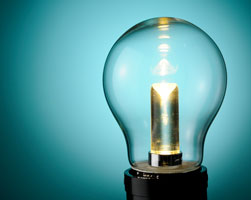 Lighting has had very little standby power associated with it because incandescent lights were controlled with mechanical switches and fluorescent lights had switches upstream of the power supplies. This situation changed with LEDs because LEDs required DC power. In addition they were often networked. An increasing fraction of lighting controls include one or more features that require continuous power, including networking, displays, lighted switches, indicator lights, or DC power distributed to the lights themselves.

A device usually enters a “sleep mode” after a period of inactivity and then returns to the original active mode when it receives an external indication of activity. The sleep mode was first employed in computer monitors In the late 1980s. The sleep mode increases time spent in a standby mode but greatly decreases the time a product spends in active modes and so saves energy while providing convenience. Mobile phones are also asleep most of the time. A device that is asleep may wake for many diverse reasons. In contrast, a device that is off only exits that mode due to a power command (manual, remote control, or even over the network).

The term standby is often associated with off mode consumption, but the existence and growth of sleep modes makes clear that the topic should cover low power modes generally, as well as power management to automatically shift to lower power modes. 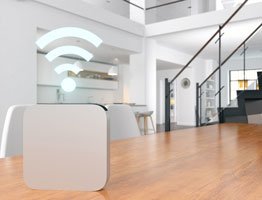 An increasing fraction of electronics, appliances, and other devices in buildings have network connections. Most of these need to be on the network continuously to be able to receive communications at any time. A network connection requires power for the physical layer interface to send and receive data (wired or wireless) as well as to do computation to maintain network connectivity. Being network-connected can increase or decrease a device’s energy use, but in any case, energy is usually not the driving force for adding communications.